If there is one place that has always been a famous stop at every Manila, Philippines tour, it’s definitely Intramuros. The historic walled city houses not only significant pieces of Philippine history but also interesting facts and tidbits about the Spanish era in the country.

Exploring Intramuros, considering its size, might take you a while. But with Bambike’s bamboo bike ecotours, you never have to break a sweat at all. You can choose from a full tour, express tour, or a sunset bambike tour.

Ready to see what's in Intramuros? Here are 5 top sites you must visit while exploring the walled city by bicycle!

Nestled in the middle of Intramuros, right on Plaza de Roma, is the Manila Metropolitan Cathedral-Basilica, or more popularly called Manila Cathedral. The structure belongs to the oldest and most frequently visited cathedral in the country. Manila Cathedral serves as the seat of the Archbishop of the Archdiocese of Manila and has witnessed a handful of papal masses held in the Philippines. From a humble parish back in 1571, it was elevated to cathedral status in 1581 before finally earning the title Minor Basilica 400 years later. While it suffered from plenty of mishaps, including fires, wars, earthquakes, and typhoons, the Neo-Romanesque-Byzantine cathedral still stands proud, albeit the major reconstructions it underwent over the decades.

Referred to as the Immaculate Conception Parish or the Archdiocesan Shrine of Nuestra Señora de Consolacion y Correa, the San Agustin Church is another Roman Catholic church found within the walled city of Intramuros. It is dubbed as the oldest stone church in the Philippines, having been built back in 1607. It sits on General Luna St., a mere five-minute walk from the Manila Cathedral. San Agustin Church’s structure is inspired by the Augustinian temples in Mexico, with the symmetry and interiors all screaming of grandeur from the Spanish golden era.

Fort Santiago holds a number of interesting sites that played a significant role in shaping the history of the Philippines. Aside from it being well-known as the prison of Dr. Jose Rizal before his execution, the area has also witnessed gruesome Japanese massacres during their occupation. While in the fort grounds, you should not miss dropping by the Rizal Shrine, a museum-like building that houses replicas of several of the national hero’s work and legacy. The Plaza Moriones and the Baluarte de Santa Barbara are also top destinations in the area not only because of the history they hold but also because of their beauty in every corner.

Commissioned by Former First Lady Imelda Marcos in the 1980s, Casa Manila is the perfect place to go if you’re looking forward to experiencing what a true Spanish home feels like back in the days in Intramuros. The museum is a replica of the San Nicolas House that once stood at Calle Jaboneros or one of the few grand houses found in Barrio San Luis, which is included in the four initial villages in the walled city. It resembles the Spanish colonial lifestyle and the grandeur of the architecture and home interiors that were common during the late Spanish period.

The two-storey Aduana building once served as the home of various government offices. It boasts of its Neoclassical architecture, which is particularly visible on the building’s façade. It was originally built in the early part of the 1800s to attract merchants but has been passed on to several government agencies over the years. The Aduana incurred damages following the 1863 earthquake and was demolished about a decade after. Today, the building is on its way to reconstruction and is envisioned to house the National Archives of the Philippines.

Discover more about the Philippines’ colorful history and explore Intramuros on a unique bamboo bike! 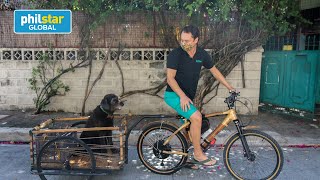